The 50 largest NBFCs are looking for Rs. 700 billion in just the current month. The sector needs Rs 1.2 trillion in the current quarter and will have to refinance 40 percent of its debt over the next 12 months.

In India, crises move slowly. We’ve known for years that the state-controlled banks that dominate the financial sector were groaning under the weight of bad loans. For years, though, the government successfully kicked the can down the road. All those assets haven’t been accounted for yet, the banks haven’t been fully recapitalized, the bankruptcy process isn’t working to schedule, yet somehow the banks are still chugging along. 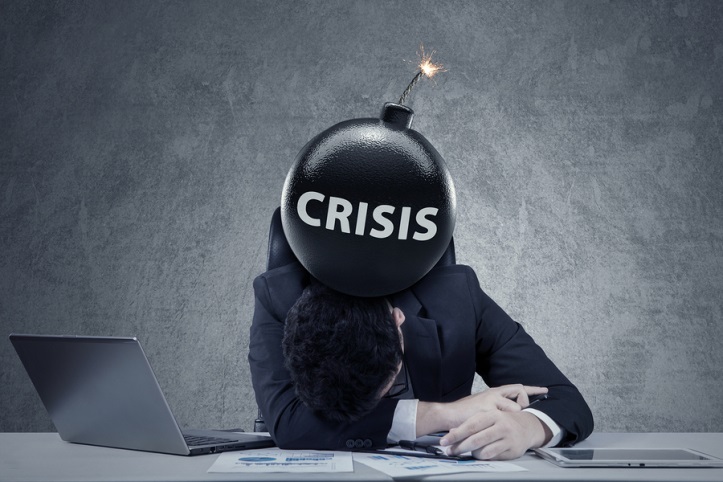 India’s luck may be about to run out. The country’s shadow banking sector — dominated by what officials call “non-banking financial corporations” or NBFCs faces something of reckoning over the next month. Ever since a leading NBFC  Infrastructure Leasing & Financial Services Ltd., or IL&FS defaulted on some of its debt recently, the entire sector has been starved of funds. The amount shadow banks managed to raise through the sale of commercial paper short-term debt fell by 65 percent in October, according to Edelweiss.

IL&FS ran into trouble because it was borrowing short to lend long. Given that such behavior is common throughout the sector, everyone is worried about whether shadow banks will be able to roll over their debt. The 50 largest NBFCs are looking for Rs. 700 billion in just the current month. The sector needs Rs 1.2 trillion in the current quarter and will have to refinance 40 percent of its debt over the next 12 months.

Some of the bigger shadow banking players, particularly in housing finance, might find that the liabilities due to be paid are higher than their assets maturing over the same period. The sector is in dangerous territory.

For India and its government, this poses a real problem one that will get worse if a few big NBFCs collapse because there’s insufficient liquidity in the market. While shadow banks account for at most 15 percent of lending in India, they seemed like safe and attractive destinations for the savings of the middle-class. They’ve also become central to infrastructure finance over the past few years. If a lack of funds slows down the real estate and infrastructure sectors and thus construction blue-collar jobs, too, would be lost. This isn’t the sort of thing any government wants just months before an election.

That’s why all sorts of bailout schemes are being planned. Some of them might be worth trying. Most, though, look like bad ideas.

For instance, India’s largest bank, the State Bank of India, has promised to buy Rs. 450 billion of shadow-banking assets and banks have been allowed to lend more to NBFCs. There’s nothing inherently wrong with a bank buying distressed assets, as long as we can be sure it’s being done in the bank’s best interests and not because bureaucrats in New Delhi think that state-run banks’ money is theirs to command. If people fear that banks aren’t being sufficiently discriminating when buying NBFC assets, they’d have even more reason to worry about the asset quality of those banks. In other words, bailouts could spread contagion, not contain it.

What’s more problematic, perhaps, is the government’s insistence that the Reserve Bank of India opens up a special window to lend money to the sector as it has for banks. Think of this as being something like what the Federal Reserve did during the 2008 crisis when it expanded its historic role and chose to become a lender of last resort even to shadow banks.

The RBI is resisting; it doesn’t think there’s a systemic risk here. It also thinks it can do better than the central banks of the West did in 2008. While the latter may have prevented a crisis, finance got off too easy. The RBI seems convinced that India’s shadow banks need to clean up their act and they won’t if they get access to easy money now. If a firm or three end up going under, so be it. That would be better than using public money to create a dozen more failures such as IL&FS over the next few years.

This is a genuinely brave and praiseworthy stand. One of the great wonders of Indian economic history is that so few firms are allowed to fail in an economy that constantly under-performs expectations. That’s one reason few sectors manage to rise above mediocrity: The market is never really allowed to work.

This crisis may be an opportunity to change that mindset. India needs a vibrant shadow banking sector; there are some things that regular banks just can’t or won’t do. But the country won’t get one by coddling institutions that are borrowing at the wrong tenures and lending to the wrong sectors.