With a current market cap of over $143 billion, cryptocurrencies are changing the way we understand finance and economics. For perspective, Facebook has a value of $496.0 billion, or 3.46 times the entire market capitalization of all cryptocurrencies worldwide. 2017 saw the price of one Bitcoin exceed the value of one ounce of gold, and new blockchain currencies have followed suit.

Since its founding in 2009, Bitcoin has grown to be the largest cryptocurrency — with over 16.5 million bitcoins on public ledgers and a market capitalization comparable to Paypal‘s. Bitcoin’s acceptance and popularity paved the way for future cryptocurrencies, and can now be used to purchase everything from food to vehicles to vacation packages and real estate! 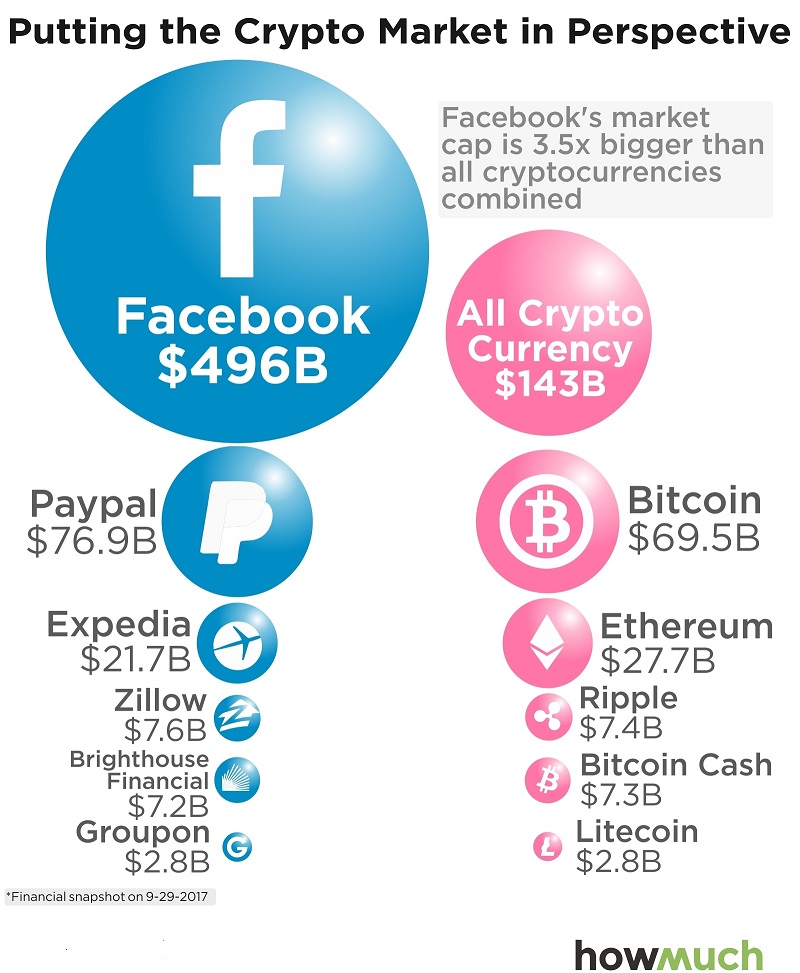 As the second largest cryptocurrency by market capitalization, Ethereum has developed a unique story since its inception in 2015. Ethereum’s hack — a loss of around $30 million — led to a split, and cryptocurrency news outlets are predicting another before the end of 2017. While Ethereum may not be as widely accepted by merchants as its older brother, Bitcoin, rapid growth has catapulted Ethereum’s market cap above Expedia’s ($21.7 billion).

With roots tracing back to as early as 2004, it’s quite possible that the innovation behind Ripple was one of the earliest predecessors to blockchain currencies. While Bitcoins are mined, Ripple has a predetermined set of coins, a centralized transaction ledger, and a different protocol for verifying purchases that make it faster than Bitcoin. With a value of over $7.4 billion, Ripple has a market capitalization greater than the successful online real estate platform Zillow.

Be alert Bitcoins are not approved by RBI

As Bitcoin outgrew its infrastructure, developers searched for a way to decrease the wait time for bitcoin transactions without opening the currency to the type of spam that had inspired the original limits. Enter: Bitcoin Cash. With a blocksize of 8MB instead of 1MB, Bitcoin Cash was designed to be the faster, more secure, decentralized peer-to-peer cryptocurrency of the future. While relatively young, Bitcoin Cash has a market cap of $7.3 billion, larger than value of Brighthouse Financial ($7.2 billion).

As one of the early adopters of cryptocurrency technology, former Google engineer Charles Lee created Litecoin in 2011 to improve speed and security for transaction confirmations within a blockchain. While the smallest on the list, Litecoin has an active community of users and developers with a market capitalization of $2.8 billion — equal to the local discount promotion company Groupon.

Russian Hackers Used 9000 computers to Mine Monero, Zcash, Other Cryptocurrencies

With surging popularity and growing market capitalization, cryptocurrencies are here to stay. The future of information security, financial legislation, and economic growth will factor into widescale utilization and development of this new asset class, but year-over-year growth and technological innovation illustrate a promising start for cryptocurrencies around the world.