The fast-growing stock market of India is now approximately equal to the economy of India.

Numerous records are seen this year by the benchmark index, it is still comparatively cheap by the sage of Omaha’s favorite valuation indicator which is market capitalization to GDP (Gross Domestic Product). By that scale, the evaluation of S&P BSE Sensex is still more than 40 % less of its high point reached just before the global financial crisis. 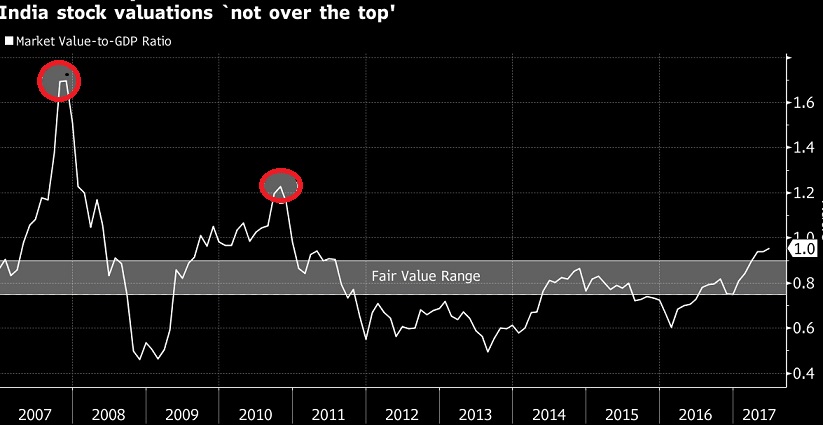 “The proportion is far below in comparison to 2007 peak period”, says Ramdeo during an interview in Mumbai and “we are definitely not over the top”, he adds. He has been continuously attending the annual meetings of Warren Buffett for the last two decades.

Nearly 17% gain acquired by Sensex this year simply means that when evaluating by price to earnings, India is currently one of the most expensive markets across the Asia. This recovery has pushed the value of Indian equity funds to $2 trillion approx. or one can say, 95% of the GDP of the India. In past 2007, it aroused to as high as 170%, and in 2010, it rose to 122% high. 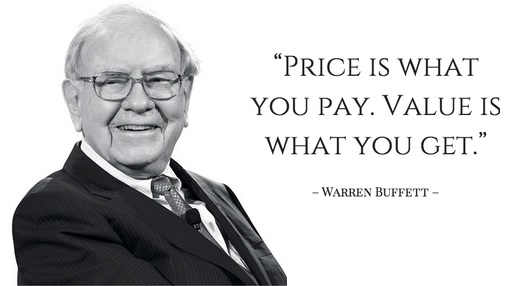 In an article published on December 2001 in the Fortune magazine, Warren Buffett illustrated the ratio as “probably the best single measure of where valuations stand at any specific time period.” Warren says stocks are more costly if the metric stands more than 100% of GDP, on the other side, traders say that readings of 75-90 % exhibit real value. In the case of India, while equities are streaming, so is the economy of the country also; it is stretched near 7.1 percent in the year ended March.

Both Foreign and Domestic funds have invested a combined $13.5 billion in Indian shares this year after a conclusive victory of the political party of the Prime Minister Narendra Modi in the state polls in the month of March. Also, Sensex is the best performer this year across the Asia.

Success story from 1 Lakh to 1 Crore in 22 years

Ramdeo Agrawal has experienced many rise and fall period in over three decades while making an investment in Indian equities. He says, ‘the market will face a drop before continuing its economic rise in the value. A minimal percent of 5 to 15% improvement can always happen without any specific reason but it will happen when everyone is least expecting it, he adds.

The question arises, why Warren has not invested in Indian companies yet if his favorite metric is not highlighting a warning signal ?

In last month, after his annual meeting in Omaha, Warren said in an interview that if there was a good target he’d ‘be there tomorrow’. The business would require being large and for sale.

Ramdeo Agrawal said, “He says ‘my gun is loaded to hunt the elephants’. He is sitting on approximately $ 80 billion. India has a numerous range of companies that suits his investment basis but the matter is with the amount of size to make available for the large investments of him.