In his inaugural speech, president Trump painted a gloomy picture of an America that was broken and is in dire need of fixing. In fact, as this graph shows, the U.S. economy he inherits has been improving steadily over the past six years, with unemployment showing in an equally steady decline.

The graph pulsates and changes color to indicate the state of the nation. Larger circles indicate higher levels of unemployment, and vice versa. Green means GDP growth, more so if darker green. Red indicates crisis moments, when the Gross Domestic Product contracts – by more, as the shade of red darkens.

The graph starts in 1929, an ominous year for the economy of the U.S., and indeed the world. The Wall Street Crash sets off the Great Depression, which causes hardship on a scale not seen for generations – before or since.

But the massive programme for Relief, Recovery and Reform (which also included the beginning of Social Security) did not translate into a smooth or swift recovery. Unemployment stubbornly stayed in the double digits throughout the rest of the decade, and even ticked up four and a half percentage points again, to 18.91% in 1938. Only by 1941 did the unemployment rate dip below 10% again, and the mobilisation effort that followed U.S. entry into war the next year led to the historically low unemployment rate of 1.2% in 1944. Never since has the U.S. unemployment rate ever been as low as that – nor ever as high again as 11 years previously.

Post-war America, in the public imagination, turned from military victory to the commercial conquest of the world, bringing stability and growth in the domestic economy. Point in case: the Employment Act of 1946, which extended the federal government’s powers to fight inflation and unemployment – although the bill stopped short of advocating full employment, as so nearly achieved a few years earlier. But in reality, as this graph shows, peace did not bring immediate prosperity. Between 1945 and 1949, GDP contracted and unemployment crept up again, to 5.9%. But from 1950 onwards, growth returns, and unemployment goes down again.

By 1954, the Dow Jones had returned to pre-Crash levels, officially ending the Recession. Apart from two ‘red’ years this decade – 1954 and 1958 – the economy keeps growing and growing, all the way to the early 1970s. Unemployment gradually drops to a low of 3.6% in 1968; but starts to creep up again even before the Oil Crisis, which turns the start of the next decade red, and leads to ‘stagflation’ – low growth plus high inflation.

President Reagan oversees an even bigger contraction of GDP in the early 1980s, but the rest of the decade sees a recovery to growth and lower unemployment – only perforated by the Savings and Loan Crisis of 1989, a financial meltdown that was felt well into the 1990s. However, the Clinton years witness another long stretch of economic growth, the establishment of NAFTA and the balancing of the federal budget.

The presidency of George W. Bush was hit by the stock market crash of 2000, and by 9/11 a year later. The ensuing war on two fronts – in Afghanistan and Iraq – doesn’t seem to have a negative impact on the home front, where growth stays strong and unemployment stays low. But the fact that the European Union overtakes the U.S. as the world’s largest economy in 2007 could be seen as a sign of underlying weakness – but that warning is soon rendered obsolete by the financial crisis that erupts the next year. Dubbed the Great Recession, it sees a serious contraction of the economy and a spike in unemployment spike at 10%. Measures taken by president Obama avert an even worse crisis, and the economy starts to grow again, although the so-called ‘jobless recovery’ leaves many ordinary Americans wondering when or even whether they will reap the benefits of the improving economy.

Unemployment has now fallen to what has come to be considered a natural low, of 5%. Could it ever return to the catastrophic levels of the early 1930s – or the near-full employment of the mid-1940s? As the Trump era begins, it remains to be seen whether the new president’s policy changes will extend the virtuous cycle of rising growth and falling unemployment – or punctuate it with a red mark for recession, followed by rising jobless rates.

Remember year 2008s Lehman brother’s subprime crises that traumatize financial institutions, trembled global economy and capital markets across the world. Since then global economy is witnessing periodically hits one after another by way of grace, Spain, Italy’s, European crises, last one i.e. Brexit.

Now it’s time of Germany’s one of the largest bank investment Deutsche bank. No surprise! Reasons are the same  old issues as major corporate frauds, financial mess, over exposure to risk assets, lack of transparency, lust of number one, unhealthy completion .It seems that we are not ready to learn any lessons from the others mistake. At one time Deutsche bank was mixed up in 72 trillion $ of derivatives financial instruments about a quarter of total global derivatives exposure, which is  as on today brought it down to 42trillion $ (only). 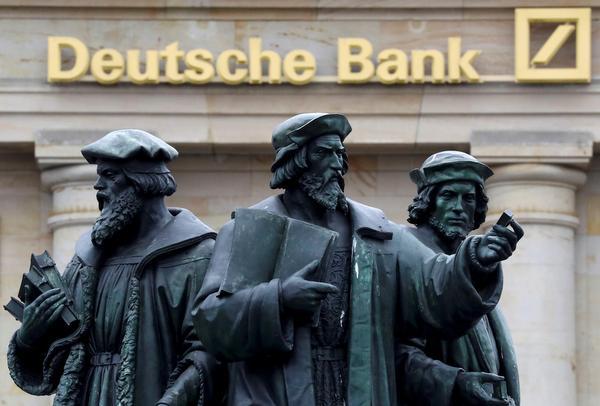 This issue became more dangerously visible when it’s US subsidiary failed to clear the US stress test & in the investigation US authorities found deutsche guilty of miss selling mortgage back securities. US authorities offered 14 billion $ settlement with minimum amount of fine but deutsche bank CEO not only express his inability to make its payment but anywhere near to that amount due to liquidity crunch.

Wait not all over yet. Three major banks are in trouble Deutsche is just one of them & this is for sure that if it sinks it could take many more banks with it. 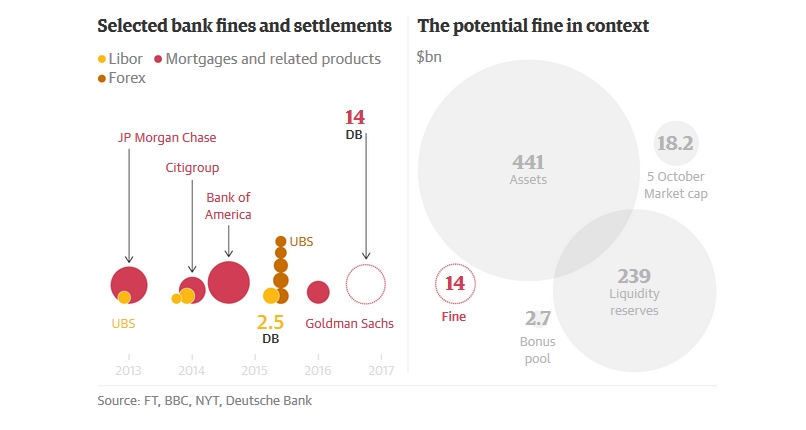 Now the problem is that bank is severally  under-capitalize, should infuse capital. Their capital requirement is 254 % of the market capitalization. But the question is how it will happen? Banks financial derivatives investment appears sound which include interest component along with the principal. Whereas practically some of them are not recoverable. Some of them have cap on loss making circumstances. So the options are very limited.

Turnaround of Deutsche bank is also very limited due to its single arm business as investment banker business with such profitable potentiality. Management is looking several other cost cutting options from staff downsizing to closing operations in some countries including some home branches. Its share is also plummeted heavily & lingering low to its 33 years.

Even if deutsche bank sale its UK & China base insurance business will generate not more than 5 billion $.Sale of equity is also not the option one can consider due to fall in share prices in the market. European Union central bank’s rules are stringent even if Germany wants to bail out package.

Deutsche bank’s failure will be a major embracement for the Germany & its political leaders who gives lectures to other financially stressed European Union member countries. Though initially German authorities denied any government support but they will not allow to fail & will do all possible efforts to save such major bank. But major concern is of its quantum of financial mess.

More important to see all these developments in the back drop of euro zone developments. Already euro zone economy of the euro zone countries, their banks are in crises, Brexit is imminent. Migration in European countries from war zone countries is already affecting the economy of the member countries including Germany besides their euro zone financial crises.  In such situation failure of any such major bank leads to financial earth quick with its magnitude 5 times more than Lehman brothers problem.

EMI VS SIP ( Be controlled or take control )

But one thing is for sure Germany & Europe  cannot allow to collapse that not only could lead to free fall of global banking but could lead to the entire European Union collapse.

Such major financial catastrophe always results in upsurge of precious metals such as gold, silver due to its safe & secure investment. It is estimated that gold can go up to 1500 to 2000 $ per ounce minimum and silver not less then 50 to 75 $ per kg.

In the given circumstances Indian investors neither required to press panic button immediately nor ignore or buy time with wait & watch approach. Instead of it, should adopt balance approach & start using much neglected strategy SWP i.e. systematic withdrawal plan effectively. Start booking profit of fairly appreciated investments & investing in stocks with strong fundamental background, or schemes with diverse portfolio with investment in blue chip companies.

Process of setting a new bailout in place is fragile Aggregate Eurozone growth should not be much affected by the Greek Crisis Expect ECB to be very visibly backstopping government bond market Greece failing to pay €3.5 billion to ECB by July 20 may result in ELA being cut off Euro weakness main eco transmission route into dollar trading regions such as Asia India stands out if € does weaken further or faster than expectations Developments in Greece may not have big impact on US Fed policy Indonesia & India may benefit from implied easing in global liquidity. 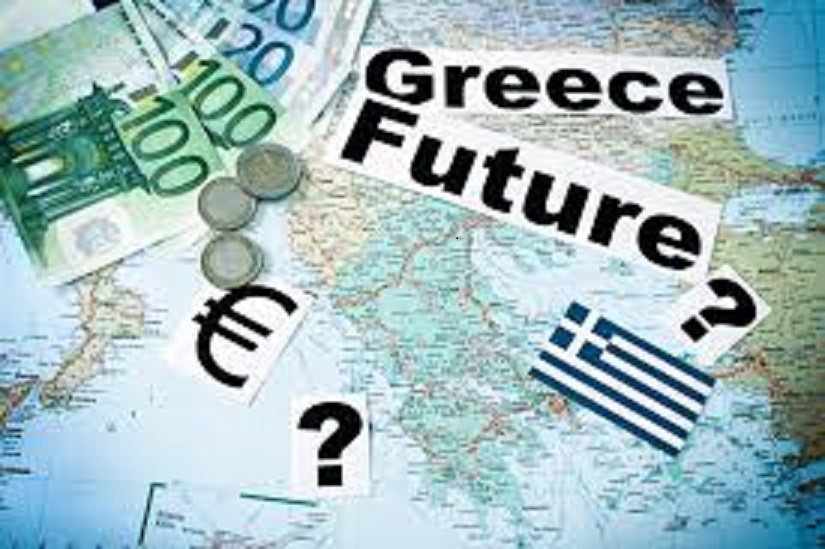 Pressure on brent is on the back of not just a sentiment change in terms of what will happen with Greece going ahead, it is also because of fundamental factors such as nuclear deal with Iran, which has the potential to affect supply. He adds that the pressure on crude oil is likely to stay as the geopolitical factors will continue to persist for some time.