The real estate suffers a lot these days. 2016 ends up bad for them. But hope doesn’t have any end. Many expectation are there in the year 2017 for the real estate industry.

Real estate saw an immense change this year, especially on the policy front. Few of the massive game changing policies such as GST and RERA have cleared the obstacles on their way and and moved towards the execution in full speed.

The demonetization has created a substantial confusion among all. But by implementing Benami Transactions Act, it assures to bring clarity in the real estate sector.

Real estate investment trust (REIT) has assured to open up the real estate market to smaller investor in the upcoming years and now there will be much focus on the affordability in housing sector. India’s Tier-I cities moved up to the 36th rank in JLL’s biannual Global Real Estate Transparency Index in 2016 due to improvements in structural reforms and liberalization of the foreign direct investment (FDI) policy.

After the announcement of demonetization on 9th November, the old currency notes of 500 and 1000 were withdrawn from the banks as a legal tender. After this act, the real estate transaction has been slow down, especially in the land and capital raising business.

The parliament passed Real Estate Regulatory Agency (RERA) in the month of March, 2016. All the states of India including union territories had a last date for the implementation of the act i.e. 1 year from the date the bill passed. This will bring clarity to the real estate sector than never before.

Real estate investment trusts (REITs) will help small investors to invest in Grade-A commercial real estate across India. In budget 2016-17 dividend distribution tax (DDT) has been excluded on special purpose vehicles (SPVs). Rules for REITs were relaxed, and the investment cap in under-construction projects was raised from 10% to 20%.

The amendment gives the right to the government to usurp the properties or assets held in the name of another person to avoid the tax responsibility and conceal the unaccounted wealth. The act covers the properties such as tangible, intangible, movable or immovable and also comprehend any right or interest in those properties.

The GST is the single-largest taxation reform in modern India, and assures to blot out geographical barriers for businesses by lighten the differences in indirect taxes relevant within the various states in India. The deadline for the implementation of the act is 1st April, 2017.

As per the demand made by the public, the space requirements for office in sectors such as FMCG, manufacturing, logistics, etc.. had improved a lot in 2016 and it should be same as in next coming years. Commercial real estate sector is heading their business towards the highest level o growth these days and doing a great job.  Depreciation of the INR versus the USD and Euro is likely to play a major role in this.

The office space needs of technology and outsourcing firms (especially in software development) slowed down in 2016. The step taken for the growth of top technology firms was in single digits due to global uncertainty and technological interruption.

As India is improving on the ‘ease of doing business’ rankings and policies are made more investor-friendly, so higher FDI is suppose to rule into India very soon. The Modi government’s focus on wooing foreign investment is helping. Demand has been steady so far – and if GDP growth is maintained as it is, then demand will definitely rise up.

A pan-India trend that came out in the year 2016 was that a higher number of units were sold every quarter (1Q16-3Q16) than new project launches in the same period. A very few of the new launches helped to reduce the inventory project. The result of demonetization changes in the fourth quarter readings being intensely different from the first three quarters once they get in.

Since, the old currency notes of 500 and 1000 are not in use now, that is why, home buyers or investors using unaccounted wealth to carry out transactions in cash would be in difficult situation, and developers accepting cash components are facing a higher liquidity crunch than those accepting all payments through cheque or bank transfer.

In cities, especially in Hyderabad, Pune and Bengaluru, Capital Values (CVs) saw an affable appreciation in 2016 and this will definitely be continued in the coming years as the residential markets are being mature and become more end-user-driven than ever before. Sales are going to remain constant throughout the year. It is suppose to rise up from 2H2017 after the settlement of demonetization, which has made many buyers hold on to their purchase decisions as they are waiting for the slowdown of the capital values in residential sector. 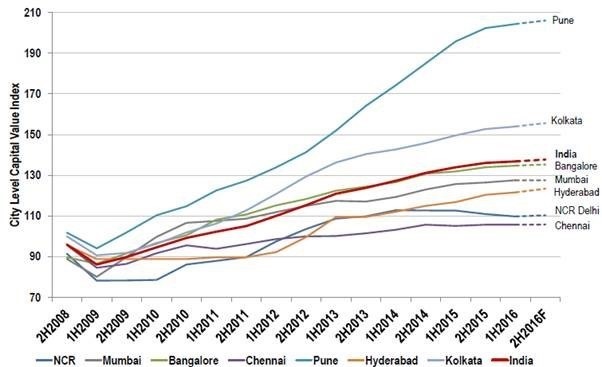 Supply was approximately 2 times less than the absorption in the year 2016. 14 poor malls closed down in the past few quarters or getting spruce up into office buildings and shopping centers in the cities like Delhi and Mumbai, the retail space across key Indian cities stood at 75.8 million sft as of 3Q16.

2017 is likely to see the highest mall space becoming operational, second to 2011. High levels of activity are expected 2017 onwards, after a prolonged slowdown from 2014 that lasted through 2016. This slowdown was the result of very few malls getting completed in these three years, and also due to poorly-performing malls shutting down. All three segments of retail – apparel, F&B (food and beverage) and entertainment & cinema perform well in 2016. High streets and malls saw more and more people eating out, which helped the F&B category. Delhi and Mumbai led this growth. Entertainment and cinema also saw a good performance this year.

Various brands like LeEco have filed applications with the Foreign Investment Promotion Board to set up their company-owned stores across India. Brands are also looking at expanding their production activity in the country. This is one of the various requirements of the government, as per our prime ministers ‘Make in India’ prospect.