“India is the only country among major emerging markets that satisfies all the conditions — a sizable economy, high growth rate and yield, and political stability,” said Go Ikeda, a senior fund manager at Mitsubishi UFJ Kokusai Asset Management Co.

“Investors are looking at where the growth will be in the medium to long term, without having to worry about short-term swings in the market.”Kazuto Wada, an executive director at Nomura, Japan’s largest brokerage.

India’s economy is expanding at about seven times the pace of Japan’s, buoyed by a burgeoning middle class and more one than million young people joining the labor force every month. Indian shares have hit multiple records this year amid optimism about Prime Minister Narendra Modi’s policies.

The rupee has gained 5.8 percent versus the dollar in the past six months in Asia’s top performance. The nation’s 10-year bond yield of 6.45 percent ranks second after Indonesia among major Asian economies and compares with 0.07 percent in Japan.

The combined assets of three India funds run by Nissay Asset Management Corp. have topped 100 billion yen since their launch 2015.

For Franklin Templeton’s Michael Hasenstab, “unprecedented” structural reforms by Modi and relatively high yields make India a “sweet spot” among emerging markets. On July 1, India introduced a goods and services levy designed to unify the nation into a common market and widen the tax net. 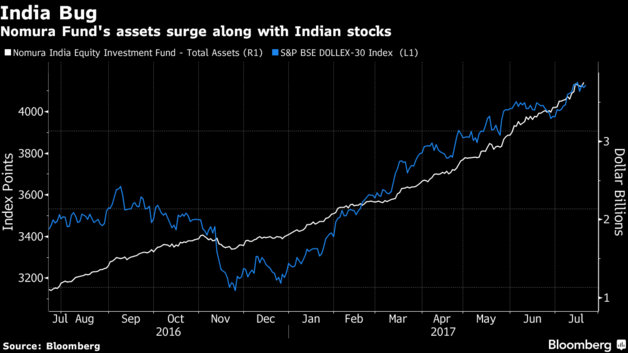 Kato shared his views in an interview in Tokyo on Friday.

Why is India so popular now?

How does India compare with other countries?

What is your outlook on RBI’s monetary policy, impact on bonds?

What is your outlook for the rupee?

What does the India bond fund hold now?

With assistance by Garfield Clinton Reynolds